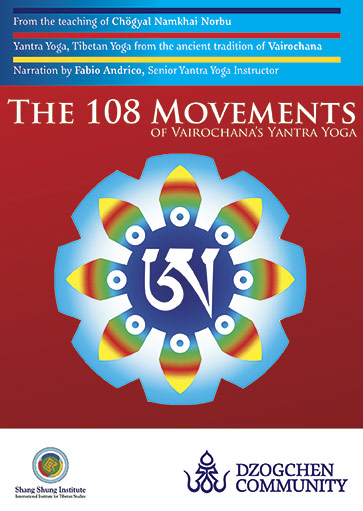 THE 108 MOVEMENTS OF VAIROCHANA'S YANTRA YOGA

Yantra Yoga is a system of practice that includes body postures, movements, breathing exercises and methods of concentration, and can be considered to be the equivalent of Hatha Yoga within the Buddhist tradition. There are numerous systems of Yantra belonging to the various tantric cycles. The system we practice is based on the root text The Union of the Sun and Moon Yantra written in the eighth century by the Dzogchen Master Vairochana and on the commentary written by Chogyal Namkhai Norbu, A Stainless Mirror of Jewels. From the eighth century, the profound knowledge and experience of this practice has been transmitted from master to disciple in an unbroken lineage until the present time, when Chogyal Namkhai Norbu began teaching this Yantra in the West in the early seventies.

Contents of the two disks: